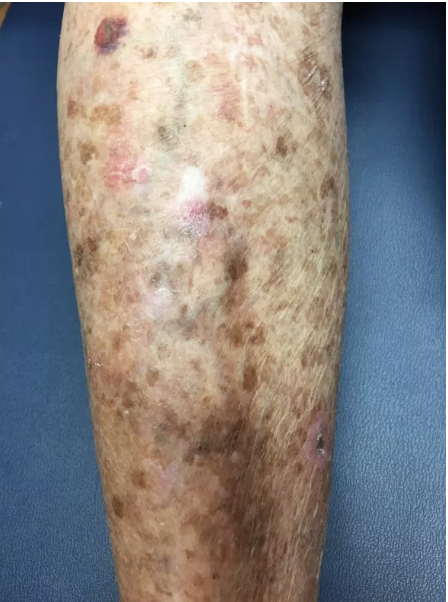 I thought it was my imagination, but apparently not — there is distinct subset of patients, mostly mature women, with squamous cell carcinomas (SCC) of the keratoacanthoma type (KA) usually presenting on the anterior distal lower extremities.

These patients are not immunosuppressed. Munday et al performed a retrospective chart review of 4 patients (3 women, 1 man) with multiple SCCs on the leg was performed including 35 biopsies from the legs. Histopathologically, the tumors lacked adjacent actinic keratosis (AK) and often had adjacent basaloid retiform proliferations. Most lesions (all but one) were well differentiated and about 40% could be classified histopathologically as keratoacanthoma., although 70% had at least KA-like features. Perineural invasion was present in only one case. Using the American Joint Committee on Cancer (AJCC) staging criteria for SCC, 21 tumors were Stage I, and 9 Stage II. The prognosis of these lesions is good. During 7–10 years of follow-up, no recurrence or metastasis occurred. Patients with multiple SCCs on the lower extremities can have a range of histopathologic features, from keratoacanthoma-like to well-differentiated SCC (1).

I have seen several such patients; one patient in particular has always intrigued me because she has had long-standing atopic dermatitis with multiple lesions of prurigo nodularis on her legs. Several of those lesions were biopsied revealing prurigo in some, and SCC/KAs in others. According to Wu et al, she is not unique. They reported a retrospective case series on seven elderly Caucasian women (mean age 79 ± 3.7 years) with actinically damaged skin and a long-standing history of widespread pruritus and prurigo nodules. All patients had histologically confirmed keratoacanthomas, or squamous cell carcinomas with the clinical appearance of a keratoacanthoma, that developed within the field of prurigo nodules. All seven patients had a clinical response to acitretin with a decrease in the number of lesions. Four patients had an associated eczematous dermatitis and were also treated with cyclosporine with improvement in pruritus and prurigo nodules and no increase in keratoacanthomas. The authors concluded with the belief that there is a distinct subset of elderly individuals with extensive actinic damage who are predisposed to developing both prurigo nodules and keratoacanthomas (2).

My hypothesis is that both reports are the same condition, with trauma as the inciting factor on a background of actinically damaged skin. KAs appearing after trauma is well documented, including thermal burns and cryotherapy (3). Perhaps in some patients, other known predisposing factors (genetics, eczema, or other dermatoses) may be at play. I have seen patients develop new KA lesions around the scars from Mohs surgery (akin to keratoacanthoma centrifugum marginatum), and others just appear in whimsical crops.

While most “routine” SCC/KAs are amenable to standard surgical treatments or other modalities (intralesional methotrexate, imiquimod, etc.), in this subset of patients acetretin has been extraordinarily valuable (both in the literature and in my experience). Indeed, it has been the saving grace for these women, who, understandably, have been anxious and frustrated by their disease.