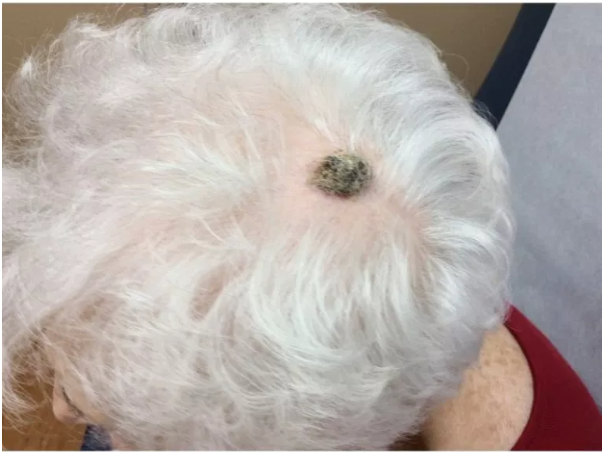 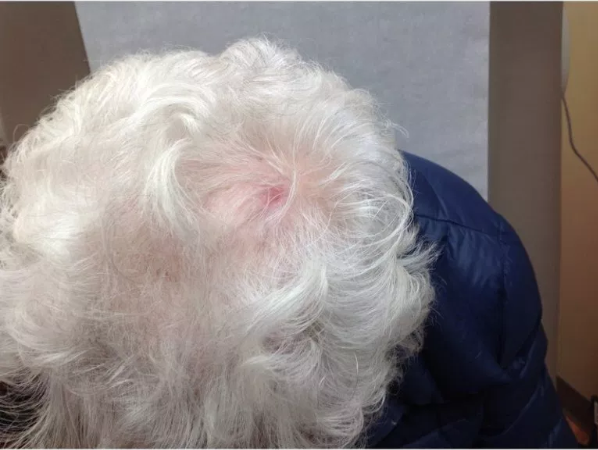 As dermatologists, we get used to discussing disorders that are foreign to other physicians. A typical story would be someone with classic notalgia paresthetica whose primary care physician does not believe that cervical arthritis is responsible for the maddening scapular pruritus. “My doctor never heard of such a thing!” patients will exclaim. My response is — “Have your doctor look it up!”

Erosive pustular dermatosis of the scalp (EPDS) is a mysterious disorder. Virtually every article you read says that it is rare disease – nonsense. Rarely recognized, maybe; rare, no way! What is infrequent (I do not recall this happening in my experience) is having this diagnosis rendered by non-dermatologists. I see several cases a year; the only conclusion I can reach is that EPDS is frequently misdiagnosed.

Recently, a healthy 95 year-old woman was referred to me for a second opinion prior to her scheduled full thickness excisional biopsy and graft for a presumed squamous cell carcinoma of her scalp. About six months earlier she had scalp trauma requiring sutures. A few months later she developed a crusted lesion of the scalp – a biopsy demonstrated “impetiginized skin with no evidence of malignancy.” The lesion persisted. The surgeon could not believe that this was not cancer. When she presented to me there was an adherent, purulent crust. Removal of the crust revealed a superficial erosion. My clinical impression was likely EPDS and I advised her to hold off any surgery until we tried topical therapy with clobetasol and mupirocin. At her next appointment, less than 4 weeks later, the lesion had resolved, with just residual erythema (see accompanying photographs).

I completely understand worrying about the possibility of a squamous cell carcinoma (SCC) — that must considered first. The diagnosis of EPDS should only be made after also ruling out other entities that may enter the differential diagnosis, including bacterial and fungal infections, pustular psoriasis, Brunsting-Perry cicatricial pemphigoid, irritated seborrheic keratosis, pemphigus, lichen planus, folliculitis decalvans, and other scarring alopecias. (1).

EPDS characteristically develops in sun-damaged scalp skin of elderly people with alopecia and/or multiple actinic keratoses (AKs). It is often triggered by local trauma such as surgical procedures, skin grafts, hair transplantation or physical and chemical procedures for AK including, cryotherapy, radiation therapy, laser therapy, topical retinoids, imiquimod and photodynamic therapy. Most recently it has been reported to be induced by ingenol mebutate (2), a burn from hair bleach containing alkaline persulfates (3), and a contact dermatitis from a prosthetic hair piece (1). The etiology of EPDS is unknown, plausibly, but unsatisfyingly being attributed to an exuberant inflammatory reaction in predisposed individuals.

Starace et al studied the clinical, dermoscopic, and histopathological features and the course of the disease in 20 patients with EPDS and compared them with the reports in the literature. The mean age was 59.4 years. Androgenetic alopecia was present in 12 patients, 6 of whom showed actinic damage. Trauma was reported in 9 patients. Four patients were affected by autoimmune disorders. The vertex was the most common location. In all 20 patients trichoscopy showed an absence of follicular ostia with skin atrophy. Histopathology revealed 3 different features, depending on the disease duration (early – mixed inflammation and mild fibrosis; intermediate – crusts, psoriasiform hyperplasia, mixed inflammation, fibroplasia, reduced number of follicles; late- thin epidermis, dermal fibrosis with slight mixed inflammation, and absent follicles) . A reduction of inflammatory signs was observed in 14 patients treated with topical steroids and in all 3 patients treated with topical tacrolimus 0.1%. (4)

In conclusion, when evaluating an elderly patient with actinic damage of the scalp, presenting with crusted lesions, consider removing the crust, performing cultures if purulent, and biopsying the base of the lesion. If the biopsy report demonstrates inflammation, without evidence of malignancy, strongly entertain the diagnosis of EPDS. There will be no harm by treating empirically for a few weeks; you can always rebiopsy the patient. Chances are your patient will be delighted. It is also our obligation to teach our non-dermatologic colleagues about EPDS — it should not remain a secret among dermatologists!