ALDY and the redemptive power of “I don’t know” 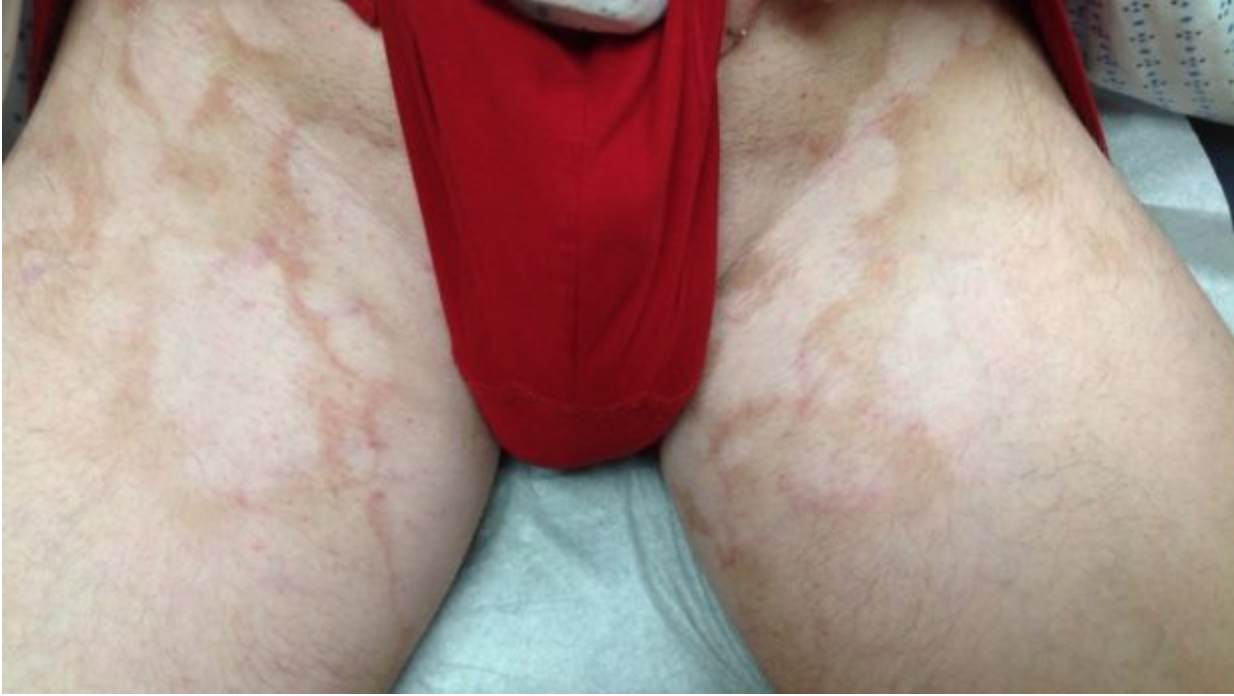 When I started my residency 37 years ago, I never would have imagined that nearly four decades later, I would be baffled by patients and their rashes every day. When I’m stumped diagnostically, I admit it (to myself and the patient), hope that either the disease will manifest recognizable features, and strive to figure it out (by repeated biopsies, ancillary tests, or seeking a second opinion).

A 21-year-old man was referred with a 9-month history of a rash on the lower abdomen, inguinal region, and thighs. His medical history was remarkable for a prior streptococcal infection. His dermatologist performed two biopsies, one demonstrating spongiosis and the other an interface dermatitis. There had been a minimal response to topical steroids. Physical examination demonstrated annular patches with peripheral erythema and subtle central hypopigmentation (see image). My clinical impression was that this could be either subacute cutaneous lupus, cutaneous T-cell lymphoma, or inflammatory vitiligo. His lupus serologies were negative; the repeat biopsy demonstrated a lichenoid dermatitis with Civatte bodies; and the direct immunofluorescence was negative. After a thorough discussion explaining that I was not at all confident of the diagnosis, I explained my rationale for trying the excimer laser (because we had ruled out lupus, I thought it might help either vitiligo or CTCL). Although there was modest improvement, he decided not to pursue further treatment. What was most frustrating was that his rash was so distinctive, yet I was unable to accurately diagnose it.

A year later, I was reading the Journal of Cutaneous Pathology, and came across an article about ALDY (Annular Lichenoid Dermatitis of Youth) from Jakki Junkins-Hopkins’ lab, detailing the case of a 7-year-old boy with an identical presentation. The histology of the lichenoid dermatitis was characterized by quadrangular rete alteration and colloid bodies (1). I asked the dermatopathologist to review my patient’s original slides, and indeed, the histology matched perfectly. My joy in securing the diagnosis was dwarfed by the patient’s satisfaction of having a precise name for his condition. (Trying to explain the “why” behind the diagnosis is another matter altogether!)

ALDY was originally described by Annessi et al in 2003 (2). ALDY is noted more commonly in males, with a male: female ratio of 1.6:1. The condition presents as multiple annular patches or plaques located predominantly on the flanks and groin that may extend to the abdomen and, more rarely, on the axillary region or neck. Clinically, the differential diagnosis includes vitiligo, hypopigmented mycosis fungoides, lupus or morphea. Molecular analysis of ALDY shows a polyclonal T cell population, in contrast with patch/plaque lesions of mycosis fungoides. Review of the literature indicates that most patients are healthy with one patient noted to have a coincidental hepatitis B immunization. On histopathology, focal to massive basal keratinocyte apoptosis is observed, mostly at the tip of rete ridges. A moderate to marked inflammatory infiltrate in a typical lichenoid pattern of distribution is present in the superficial dermis. No specific guidelines regarding therapy exist –  topical steroids, calcineurin inhibitors (tacrolimus and pimecrolimus), and phototherapy (PUVA) (3) have been successful in treating ALDY, although relapses are common. Although not previously reported, the excimer laser may also be considered, based on my patient’s experience. The etiology of ALDY is obscure although the theory of it being related to Borrelia infection has been raised in cases from Austria, based on serological and immunohistochemical findings, in 9/12 and 11/14 cases, respectively (4). This is the same theory for some cases of morphea, which has not held true for cases of morphea in the United States (5).

In a recent article in the Atlantic, Steven Hatch, the author of Snowball in a Blizzard: A Physician’s Notes on Uncertainty in Medicine was interviewed. “Medicine is a high-stakes game of uncertainty, complicated by the fact that people are naturally predisposed to seek certainty whenever possible. If you don’t know what something is, it could be a threat, out there on the ancient savannah of evolutionary psychology logic. That goes for patients and doctors alike, and if both parties are in agreement that certainty is best, it’s possible that they’ll just blow past the risks of treatment, or the dubiousness of a diagnosis, for the sake of having an answer.”(6)

I have always found that saying “I don’t know” is honest and cathartic when I’m at a loss for a diagnosis. The humbling experience forces exploration of new possibilities and questioning prior assumptions. The older I get, the easier it is to say — when you tell patients that you don’t know what their diagnosis is early in your career, they figure that YOU don’t know, but someone with more experience might. Now that my hair is gray, when I say I don’t know, patients accept it a little better!