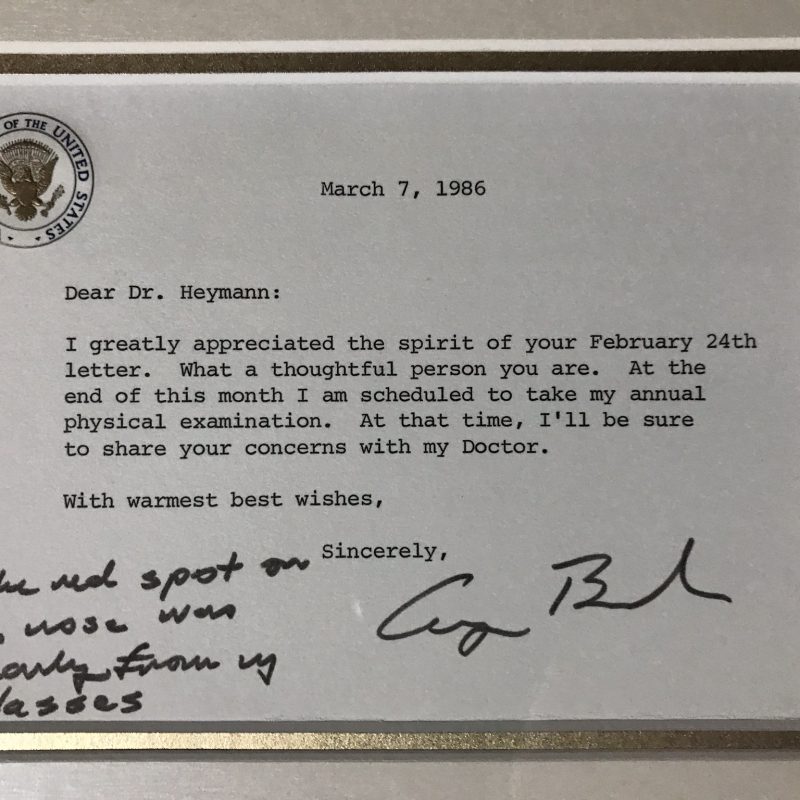 Skin lesions are observed on photographs, television, and in the movies. Whether it is Bill Clinton’s rosacea, Richard Gere’s Becker’s nevus, or Mikhail Gorbachev’s port wine stain, I have to consciously ignore these conditions to concentrate on why I am watching them in the first place.

On February 13th, 1986, the cover of the Sunday New York Times Magazine section displayed a full-face photograph of then Vice President George H.W. Bush. His sun damage was striking – undoubtedly a consequence of summers at Walker’s Point in Kennebunkport, his service in the Pacific Theater near Chichi-Jima, and in the Texas oilfield sun. I was most concerned that a freckle (solar lentigo) on his right temple could have been an early melanoma (lentigo maligna). I was less worried about a red lesion on his nose, thinking that was more likely due to pressure from his glasses rather than a pre-cancerous lesion (actinic keratosis).

It is one thing to express concern to a stranger when noticing a suspicious lesion in person — but from a photograph? Initially, I was not going to mention anything because I assumed the Vice President had superlative medical care. But then I felt guilty — what if I subsequently learned that he had melanoma and I was reticent? I decided to write to Mr. Bush, recommending that he have a complete skin examination, with no expectation that my letter would even be read — at least my guilt would be alleviated.

Mr. Bush was found to have a basal cell carcinoma on his left cheek, which was excised on May 15th, as detailed in Lawrence K. Altman’s column, “The Doctor’s World” (Basal Cell Carcinoma: Most Benign Malignancy, New York Times, May 20, 1986).

I wrote back to the Vice-President, expressing my appreciation that he had his examination, wishing him well, and advising him to use sunscreen when campaigning for President (I was somewhat presumptuous as he had not yet declared his candidacy).

He wrote again, thanking me for my letter, and stated: “My surgery was a zero — no complications, but your advice was deeply appreciated. The doctors at Bethesda Naval Hospital are outstanding and they have been very thorough.”

George H.W. Bush did not have to respond. His graciousness in doing so, however, revealed his fundamental decency and compassion. His willingness to publicly disclose his skin cancer unquestionably resulted in many people getting screened for cutaneous malignancies. Toward the end of his life he finally received accolades for his lifetime accomplishments ranging from his role in ending the Cold War to his handling of the Gulf War. I want to thank Mr. Bush for his unsung role on helping many patients becoming aware of skin cancer – another way that his demeanor improved the lives of countless individuals.

I recently finished Jon Meacham’s outstanding biography of George Herbert Walker Bush. The following is the late President’s self-assessment of his legacy.

I’ve tried to keep it; I’ve tried to serve here with no taint of dishonor; no conflict of interest; nothing to sully this beautiful place and this job I’ve been privileged to hold….[ Misjudgments] maybe on this issue or that, but never misconduct, never doing anything that would tarnish and hurt the Presidency. And yet no one seems to know that, and no one seems to care. They say, “What motivates you?” And I used to be teased about “service for the sake of service.” Well, it does motivate me. People should give; but it’s service with honor, service with a flair for decency and hopefully kindness. I know the latter never came through because the press won that one—” cold hearted,” “disconnected,” “not caring about people.” But I don’t think they can lay a glove on me in the final analysis on serving without conflict; never for personal gain; always bearing in mind the respect for the office that I’ve been privileged to hold; the house I’ve been privileged to live in; the office in which I’ve tried to serve.

Thank you, 41, for all you have done for our nation. May your legacy serve as an inspiration for our current and future leaders.