Personally, I find giant congenital melanocytic nevi (GCMN) to be among the most unnerving skin lesions imaginable. The risk of melanoma, leptomeningeal melanocytosis, and psychosocial stresses are profoundly burdensome to patients, their families, and health care professionals. With increasing understanding of the molecular pathways of GCMN we are on the cusp of targeted therapy for GCMN becoming a reality.

GCMN are usually defined as melanocytic lesions that are present at birth that will reach a diameter of ≥ 20 cm in adulthood. Its incidence is estimated as < 1:20,000 newborns, of which about 6% develop melanoma at the site of the nevus. GCMN usually appear sporadically although rare familial cases have also been reported.  The etiology and pathogenesis of GCMN are not fully understood. Defects in neural crest development, activating mutations leading to uncontrolled melanocyte proliferation, cutaneous mosaicism, and paradominant inheritance may all be contributory. Melanoblasts originate from the neural crest cells, and a complex network of interacting genes regulates their proliferation, migration, and differentiation.  MITF , KIT and the RAS/RAF/MAPK signaling pathway have all been implicated. Activating mutations in this pathway have been identified, which involve the genes NRAS, BRAF, and GNAQ. Postzygotic mutations in the NRAS gene are considered responsible for GCMN in approximately 80% of cases, because the same mutation is found in different cutaneous lesions from the same individual and in affected neurological and malignant tissue. (1)

These mutations are not a requisite for the development of melanoma, as exemplified by the development of an aggressive, fatal NRAS and BRAF-negative melanoma in a 5 month old with a GCMN. (2) Indeed, the genotypic diversity displayed between “classic” and “spilus-like” congenital melanocytic nevi provide evidence for alternative modes of development beyond the NRAS mutation paradigm. (3)

Polubothu et al undertook MC1R genotyping from blood, and high-sensitivity genotyping of NRAS and BRAF hotspots in 156 nevus biopsies from 134 patients with CMN (male 40%, multiple CMN 76%, projected adult size [PAS] >20 cm 59%). Mosaic NRAS mutations were detected in 68%, mutually exclusive with BRAF mutations in 7%, with neither in 25%.  The authors demonstrated that NRAS mutations are the commonest cause of CMN, being particularly common in the group with PAS > 60cm. BRAF mutations can be a cause of multiple CMN, having a strong but not exclusive association with a distinct multinodular phenotype. Most importantly, clinical outcomes did not appear to be different among genotypic groups. The authors concluded that genotyping does not need to be performed routinely, but should be performed when melanoma is suspected, especially when melanoma treatment is required. (4)

Managing GCMN revolves around careful follow-up for changes within the lesion and work-up based on symptoms. 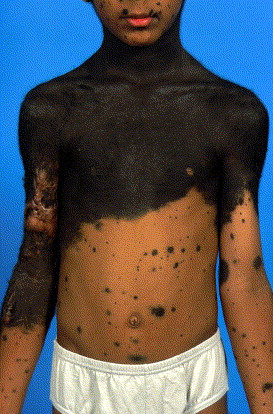 Surgical techniques for GCMN include serial resections, excision followed by skin grafts/substitutes, and use of tissue expanders followed by resection. Decision for surgery is based on the location and size of the nevi, risk of malignancy, problems related to neurocutaneous melanocytosis, psychosocial implications, and cosmetic concerns. Nonexcisional modalities for GCMN include dermabrasion, laser ablation, curettage, and chemical peel.  (5)

Mir et al detailed the case of a 7-year-old girl with a GCMN covering most of her trunk with additional satellite lesions, accompanied by asymptomatic neurocutaneous melanocytosis. Over the years the GCMN became markedly thickened and intractably pruritic. Immunohistochemical staining for BRAF V600E mutation was negative, and direct sequencing of involved tissue revealed no activating single-nucleotide mutations in NRAS, BRAF, or PIK3CA; however, fusion analysis revealed an AKAP9-BRAF fusion that has not previously been reported in congenital melanocytic nevi. AKAP9-BRAF fusion produces a kinase that lacks the regulatory domains of BRAF, resulting in constitutive activation in a RAS-independent manner, thereby exhibiting transforming activity similar to that of BRAF V600E point mutation. Existing data suggest that such BRAF-activating alterations may confer sensitivity to MEK inhibition. The patient was started on trametinib, an oral MEK inhibitor (0.5 mg daily). Within a month her pain and pruritus completely resolved. A repeat MRI after 6 months of therapy demonstrated decreased thickening of the dermis and near resolution of muscular invasion. There was a “dramatic” improvement in the size, texture, and thickness of her lesions. (From the images, I cannot detect changes in size, although the other features clearly improved). Therapy was maintained, and improvement continued. (7)

Kinsler et al detailed 4 children (2 male, 2 female, aged 0.9 to 4.0 years) with NRAS-mutated CNS melanoma who were treated with trametinib on a compassionate basis. Three patients had multiple congenital melanocytic nevi, with one displaying a GCMN. One patient had no cutaneous abnormalities. All 4 demonstrated improvement in symptoms and objectively in signs. These varied from mild improvement for 1 month, to a sustained symptom-free period of 9 months in one case. In all cases there was eventual disease progression through treatment, followed by rapid death after discontinuation of trametinib. There were no clinically-significant side effects. The authors concluded that trametinib is the first therapy with any objective or measurable effect in NRAS-mutated primary CNS melanoma. (8)

Further trials are warranted to assess the utility of targeted therapy in GCMN. It remains to be determined if such therapy decreases the risk of melanoma. Mir et al demonstrated that targeted therapy has the potential to alleviate associated symptoms and the clinical appearance of a GCMN. On May 25, 1961 President Kennedy set the goal of landing a man on the moon by the end of the decade. As we commemorate the 50th anniversary of the lunar landing, it is with that spirit of hope, determination, and science, that cutting GCMN down to size molecularly will become a reality.

Point to remember: Defining the molecular defect in giant congenital melanocytic nevi may lead to targeted therapy for these devastating lesions.

As always, Dr. Heymann provides an amazingly readable, succinct, and informative summary of a challenging topic. The molecular insights and early ‘proof of principle’ responses to targeted therapies in a few patients are exciting developments in the field. While GCMN can indeed be devastating and even lethal in a small percentage of patients, it is important to recognize that the vast majority of these patients have a normal lifespan and minimal physical symptoms from their nevi. The major consequences for these patients are psychosocial and relate to the cosmetic implications and medical anxiety associated with their GCMN. The way that the parents relate to their child’s GCMN can have profound effects on the children. Hence, I would emphasize the importance of psychosocial support for the parents during infancy and for the children during their formative years. Support groups like Nevus Network and Nevus Outreach have been a big help to many of these families in this regard.