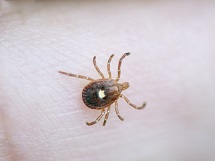 It has been a decade since Van Nunen et al detailed 25 patients living in a tick-endemic region of Sydney, Australia, who developed a red meat allergy following large, local reactions to tick bites. (1) Tick-induced mammalian meat allergy (MMA) has become an emergent allergy on six continents where humans are bitten by ticks. In each country, a major specific tick species has been implicated. In Australia, it is Ixodes holocyclus (the Australian paralysis tick); in the United States it is Amblymomma americanum (the Lone Star tick). (2)

Although prominent in the Southeast, the Lone Star tick is heading north, having established itself in Connecticut. (3) The health implications, MMA included, are clear.

Alpha-gal (galactose-alpha-1,3-galactose) is an oligosaccharide demonstrated to be present in the gastrointestinal tract of some ticks, supporting the theory that tick bites induce the production of IgE to alpha-gal and subsequent MMA. (4)  There seems to be a correlation between severity of tick-bite mediated local cutaneous reaction and the development of alpha-gal antibodies. (5) These antibodies may result in delayed anaphylaxis to mammalian meats, including beef, pork, and lamb, among others. In general, patients have reported symptoms of generalized urticaria, angioedema, or anaphylaxis from 3 to 6 hours after ingestion of mammalian meat, which was previously tolerated. (4)

MMA is also known as the alpha-gal syndrome. The main feature differentiating it from other IgE-mediated meat allergies is the delayed reaction. The most plausible explanation for the delay involves the time required for processing, digestion, and transport of alpha-gal epitopes to target tissues.  According to Wilson and Platt-Mills, “The kinetics of lipid metabolism, which involves packaging into chylomicrons and transit through lymphatics and the thoracic duct before entering the bloodstream, suggests the possibility that α-Gal-containing lipids are particularly important in the delayed allergic response.” Not every person who is sensitized to alpha-gal becomes symptomatic; this could be a reflection of heterogeneity in the complexity of alpha-gal linked oligosaccharide structures. (6)

Alpha-gal residues have been found on Fab segments of the monoclonal antibody cetuximab — an EGFR monoclonal antibody used for squamous cell carcinomas of the head and neck and in metastatic bowel cancer. When administered intravenously, potentially fatal reactions may appear rapidly. Interestingly, these patients may also demonstrate delayed anaphylaxis after ingesting mammalian meat. (7)

The first step in managing MMA is recognizing the syndrome. The long-term prognosis is not well described. Presumably (although not proven), a strict meat-avoidance diet and tick bite prevention (clothing, DEET, etc.) will abate reactions over time. (8). Acute episodes may require supportive care, antihistamines, epinephrine, and steroids. Patients at risk must carry an epinephrine auto-injector. Referral to an allergist is warranted. Skin prick testing with freshly prepared meat extract appears to be the optimal test for MMA — affected patients will demonstrate a strongly positive response. Oral food challenge is not advised because of the delayed time frame and risk of anaphylaxis. (7) Although desensitization has been reported in two cases of the alpha-gal syndrome, this is not recommended outside of research settings. (6)

Point to Remember: For patients presenting with urticaria, angioedema, or anaphylaxis in tick-endemic regions, consider the diagnosis of mammalian meat allergy.

The geographic distribution of Amblyomma ticks in the United States continues to expand. Given this expansion of territory, mammalian meat allergy syndrome is likely to become more widespread. Dermatologists should be aware of the possibility of this diagnosis in patients who present with generalized urticaria, angioedema, or anaphylaxis. The finding of Alpha-gal residues on Fab segments of the monoclonal antibody cetuximab represents a new twist on this story, and it may be prudent to ask about symptoms of meat allergy before considering this monoclonal antibody for squamous cell carcinoma.