Should dermatologists be anti-antihistamine for atopic dermatitis?

Atopic dermatitis (AD) is characterized by pruritus that results in eczema induced by scratching. Histamine-1 receptor blockers are routinely used to treat the pruritus of AD. Histamine does not seem to play a role in AD through the histamine-1 receptor. He et al reported that there were 990,000 annual visits for AD between 2003 and 2012. Antihistamines were prescribed for AD in a significant proportion of visits across physician specialties (16%-44%); dermatologists prescribed antihistamines at 22% of all AD visits. Dermatologists and pediatricians primarily used sedating antihistamines (58%-70%), whereas the majority of family/general practitioners, internists, and other specialists prescribed nonsedating antihistamines for AD (55%-100%). (1)

It is commonly believed that sedating nighttime antihistamines are useful for a good night’s sleep for patients with pruritus. However, sedating antihistamines may lead to impaired sleep quality and their sedating effects may last to the next day and potentially affect a patient’s work, by reducing cognition. 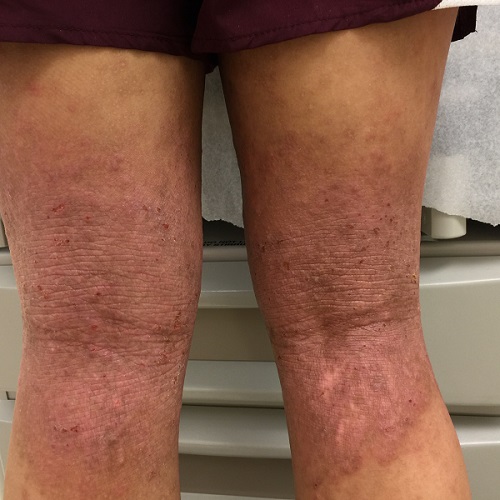 significantly poorer sleep efficiency, longer sleep onset latency, greater sleep fragmentation, and less nonrapid eye movement sleep. The authors describe their approach to this difficult problem: “We teach patients and parents about behavioral techniques to improve sleep and emphasize the effect that behavioral modification can have on sleep. If these methods alone are not sufficient, we frequently prescribe first‐generation antihistamines to be used in age‐appropriate dosing, with intermit usage if possible. If a patient develops tolerance to a first‐generation antihistamine, we favor switching to a different one. We often alternate between first‐generation antihistamines to prevent tolerance. If patients do not respond to first‐generation antihistamines, we recommend the use of melatonin before bedtime. We advise parents that the Food and Drug Administration has not approved melatonin and that its use is considered off‐label. We prescribe antidepressants such as doxepin in refractory cases. Duration of treatment depends on the individual. We do not have any experience using alpha agonists, benzodiazepines, nonbenzodiazepine benzodiazepine receptor agonists, or chloral hydrate for sleep disturbances in individuals with AD.” (3)

In patients with comorbid atopic conditions, antihistamines can give major symptom relief and may be appropriate in these situations. There are three AD comorbidities in which antihistamines may have been helpful: allergic rhinitis (13%), dermatitis due to food (8.5%), and allergic conjunctivitis (3%). (1)

Histamine may play a role in AD pathogenesis through its most recently described receptor, histamine-4 receptor (H4R).  H4R mediates histamine-induced chemotaxis of eosinophils, mast cells, and interleukin 31 (IL31). IL31 is a major cytokine synthesized by T-helper 2 cells and plays a role in AD-related pruritus.

The pleiotropic effects of histamine are mediated by four types of receptors that belong to the G-protein-coupled receptor family: histamine H1 receptor (HRH-1), histamine H2 receptor, histamine H3 receptor, and histamine H4 receptor. (4) Histamine plays roles in the induction of allergic inflammation by activating eosinophils, mast cells, basophils, and Th2 cells via histamine H4 receptor (H4R). Studies of H4R blockers have shown efficacy in reducing histamine-induced pruritus and pruritus in animal models of AD. H4R, in addition to H1R, is expressed on sensory neurons, and a decrease in scratching behaviors was observed in H4R-deficient mice and mice treated with a H4R antagonist. (5) Initial clinical studies in humans with a H4R blocker have shown good results for decreasing histamine-induced pruritus in itch severity and duration in AD patients.

Point to remember: The common use of antihistamines reflects the significant unmet need for efficacious treatments for AD-associated pruritus. Hopefully, emerging therapies, such as T-helper 2 cytokine blockers and H4R blockers, will provide adequate relief so everyone — patients, their families, and dermatologists — can sleep better.

Dr. Hsu admirably discusses an important aspect of managing AD — pruritus control that may adversely affect sleep. If the child is having a miserable night, so are the parents and siblings. This furthers anxiety and angst among all family members, with the attendant problems sleep deprivation causes. Fortunately, newer therapies such as dupilumab have greatly improved the treatment of AD, thereby diminishing pruritus, and likely improving sleep patterns. My approach is similar to that described by Patel et al, usually starting with hydroxyzine. Hopefully newer modalities, such as anti-IL-31 for pruritus, will allow us to leave antihistamines on the shelf.

2. van Zuuren EJ, Apfelbacher CJ, Fedorowicz Z, Jupiter A, Matterne U, Weisshaar E. No high level evidence to support the use of oral H1 antihistamines as monotherapy for eczema: a summary of a Cochrane systematic review. Syst Rev 2014;3:25.