“I know the variants of porokeratoses and can recite them as though I am the very model of a modern major general — Mibelli, linear, punctate, palmoplantar, DSAP [disseminated superficial actinic porokeratosis], superficial disseminated, immunosuppression-related, and porokeratosis ptychotropica. The problem is that I really do not understand the pathogenesis of the cornoid lamella(e), nor do I know how to treat them effectively. My residents have heard me tell patients that if porokeratoses could communicate, they would thumb their noses at us, laughing at our attempts to get rid of them.”

I am quoting myself from a commentary I wrote two years ago (“Joining the fold: Squamous cell carcinoma complicating porokeratosis ptychotropica”). Today, newer molecular techniques are increasing our comprehension of the porokeratoses, which may legitimately result in worthwhile therapies before I retire.

According to Jin et al: There are four genes in the mevalonate pathway demonstrated to be responsible for 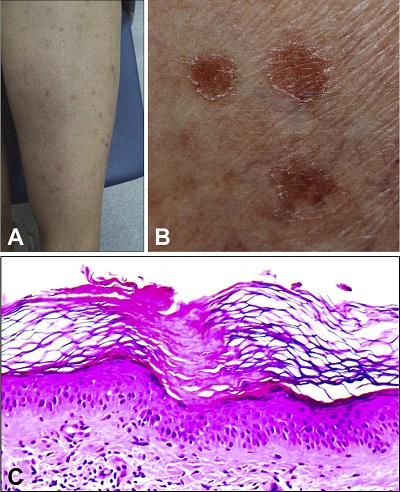 porokeratosis, including mevalonate kinase, phosphomevalonate kinase, mevalonate diphosphate decarboxylase and farnesyl diphosphate synthase. “The mevalonate metabolic pathway serves a key role in cellular processes, including proliferation, differentiation and apoptosis. Dysregulation of the pathway may lead to the development of diseases including cancer and cardiovascular disease. Components of this pathway include mevalonic acid (MVA), isopentenyl pyrophosphate (IPP), ubiquinone (CoQ), farnesyl pyrophosphate (FPP), geranylgeranyl pyro-phosphate, cholesterol (CH) and heme A. It has been reported that mutation of genes coding for the enzymes in this pathway may lead to monogenic inherited diseases, including hyperimmunoglobulinemia D syndrome (HIDS) and porokeratosis (PK).” In the presence of calcium, disruption of the mevalonate pathway leads to: 1) reduction in expression of keratinocyte differentiation markers; 2) reduction in expression of p53 and Notch1 in keratinocytes; and 3) alteration of the mitogen activated protein kinase (MAPK) and phosphoinositide 3 kinase (PI3K) AKT signaling pathways. Clearly, the mevalonate pathway is essential for keratinocyte differentiation, and disruption of this pathway may inhibit keratinocyte differentiation to varying degrees. (1)

In 2012, Zhang et al performed exome sequencing in one unaffected and two affected individuals from a DSAP family. The mevalonate kinase gene (MVK) emerged as the only candidate gene. Subsequent Sanger sequencing in 57 individuals with familial DSAP and 25 individuals with sporadic DSAP identified MVK mutations in 33% and 16% of these individuals, respectively. All 14 MVK mutations identified in their study were absent in 676 individuals without DSAP. Their functional studies in cultured primary keratinocytes suggested that MVK has a role in regulating calcium-induced keratinocyte differentiation, possibly protecting keratinocytes from apoptosis induced by type A ultraviolet radiation. (2)
Since the initial report by Zhang et al, there have been multiple studies demonstrating novel mutations in virtually all forms of porokeratosis, including ptychotropica (3), Mibelli (4), familial and sporadic cases (5).

Atzmony et al studied three patients (age 5 to 20 years) with linear porokeratosis using whole-exome sequencing of unaffected and affected tissue. They found a combination of germline mutations and novel somatic mutations or loss of heterozygosity within the lesional skin in all cases. Interestingly, the second case’s clinical appearance was consistent with ILVEN (inflammatory linear verrucous epidermal nevus). While two participants had a germline PMVK mutation and somatic loss of heterozygosity or a second mutation, the third had a germline splice site mutation in MVD and somatic frameshift deletion in MVD. The authors concluded that linear porokeratosis is associated with the presence of second-hit postzygotic mutations in the genes encoding enzymes within the mevalonate biosynthesis pathway. They raised the hope that the mevalonate pathway could be a potential target for therapeutic intervention in porokeratosis. (6)

Congenital Hemidysplasia with Ichthyosiform Erythroderma and Limb Defects (CHILD) syndrome is an X-linked dominant disorder of distal cholesterol metabolism. Topical treatment with lovastatin/cholesterol (but not cholesterol alone) virtually cleared skin lesions by three months, accompanied by histologic and ultrastructural normalization of epidermal structure and lipid secretion. (7) Perhaps this can serve as a model for the formulation of a topical cholesterol ointment capable of restoring the epidermal barrier altered by mevalonate pathway mutations. If apoptosis can be prevented, conceivably the risk of secondary squamous cell carcinomas in porokeratoses could be diminished. I look forward to the day when we run rings around the porokeratoses rather than vice versa.

Point to remember: Although the precise pathogenesis of the porokeratoses remains to be defined, whole exome sequencing has implicated mutations of the mevalonate kinase pathway as being pathogenic in many cases. This may lead to novel therapeutic approaches for these recalcitrant disorders.

Discovering the underlying genetic changes is allowing us to rethink the classification of scaling disorders. Importantly, by recognizing how these genetic changes affect protein and lipid products we can start to consider new therapeutic approaches that are disease- and patient-specific.