This commentary is dedicated to Joy, a bright, rambunctious, delightful bundle of energy with (formerly) recalcitrant atopic dermatitis, who taught me a great deal about phototherapy in children.

The cutaneous effects of ultraviolet (UV) light are by immunosuppressive, immunomodulating, and anti-inflammatory activities. Mechanisms of action include targeting of immunomodulation via apoptosis of inflammatory cells, inhibition of Langerhans cells, and alteration of cytokine production. Additionally, UV has an antimicrobial effect reducing the colonization of Staphylococcus aureus, due to its anti-inflammatory effect and improvement of the skin barrier. Other mechanisms could be due to the effects of Vitamin D metabolism and suppression of TH2 cytokines. (1)

The most commonly utilized form of phototherapy is narrowband UVB (NBUVB) because of its wide availability and lower risk of adverse effects. (2) In children NBUVB is generally considered as second-line therapy for patients with atopic dermatitis (AD), psoriasis, pitryriasis lichenoides chronica, prurigo nodularis, and vitiligo, who have had inadequate responses to standard topical agents such as steroids and calcineurin inhibitors. Eustace et al performed a retrospective review of 75 patients aged 3 to 17 years (mean 10.6 years; 35 male and 40 female) who received phototherapy. Forty-eight (64%) patients had AD and 21 (28%) had psoriasis. Seventy received NBUVB treatment and 5 received hand and foot psoralen with ultraviolet A (PUVA) treatment. All patients with AD were treated with NBUVB and 4 (8.3%) were also treated with hand PUVA. After phototherapy, 76% had documented clear to almost clear skin. At the 12-month follow-up, 52% of the patients with AD remained clear. All 21 patients with psoriasis underwent NBUVB phototherapy. The clearance rate after phototherapy was 86%. At the 12-month follow-up, 43% of the patients with psoriasis remained clear. (3)

According to Crall et al: “Short-term risks of UVB phototherapy include erythema, blistering, and xerosis, accompanied by pruritus, photosensitive eruptions, and recurrent herpes simplex virus infections. Provoking anxiety is another potential risk and should be discussed. Long-term risks include photo-aging and cutaneous carcinogenesis. The true carcinogenic potential in children remains unclear.” (4)

There are unique considerations when offering phototherapy to pediatric patients. Is the child able to stand in the unit for several minutes unattended without touching the lights? Is the child’s behavioral temperament and development mature enough to cooperate with treatment sessions? Does the child have claustrophobia or separation anxiety? (3,4) Absolute contraindications to phototherapy include both acquired and inherited disorders aggravated by ultraviolet light, such as lupus erythematosus, dermatomyositis, xeroderma pigmentosum, porphyrias, and the basal cell nevus syndrome. (4)

Although I look forward to when dupilumab is available for AD down to age 2 years, that is unlikely to happen presently. I have grown comfortable with the use of biologics, and have no qualms about using etanercept or ustekinumab, the two agents approved for children with psoriasis. For severe AD, I prefer not to use potent immunosuppressive agents such as cyclosporine or mycophenolate mofetil, if at all possible. Despite the inconvenience of administering phototherapy, and the relative dearth of studies in the pediatric population, I believe that it is truly the second-line approach of choice in recalcitrant cases.

When Joy came for her first phototherapy session, she was impossibly anxious and frightened by the prospects of having 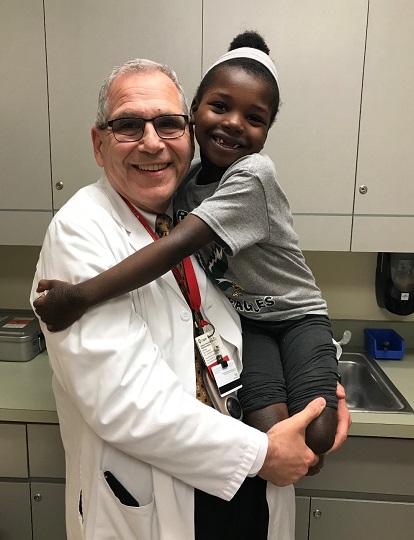 to wear protective eyewear and fearing that she could not stand alone in our NBUVB phototherapy unit. It took every ounce of my long-since-gone memory of cajoling a child to cooperate. Somehow singing the alphabet together helped. I asked her to recite it when in the box to see how far she could go, and, maybe with practice, even do it backwards! Somehow, with each treatment, she became a little less nervous, where she is now at the point of actually enjoying it. Her AD is under great control too. Yesterday, when I saw her, I asked “So how is my girlfriend today?” “I’m not your girlfriend!” she howled. “I’m your patient who likes you very much!” It does not get better than that.

Point to remember: Narrowband UVB therapy is a valuable therapy for children with recalcitrant dermatoses, such as atopic dermatitis and psoriasis.

I agree — I am a big fan of nbUVB in children. I will sometimes have parents go in fully dressed for the first couple of treatments if there is a great deal of anxiety and maybe not shut the door all the way. I am a big user of home UVB if I can get an insurer to pay for it. Our Geisinger Health Plan has been very receptive given that just a few big wins with home UVB will prevent money lost on a biological agent.