Fever, rash, and lymphadenopathy may be wearing more than one DRESS 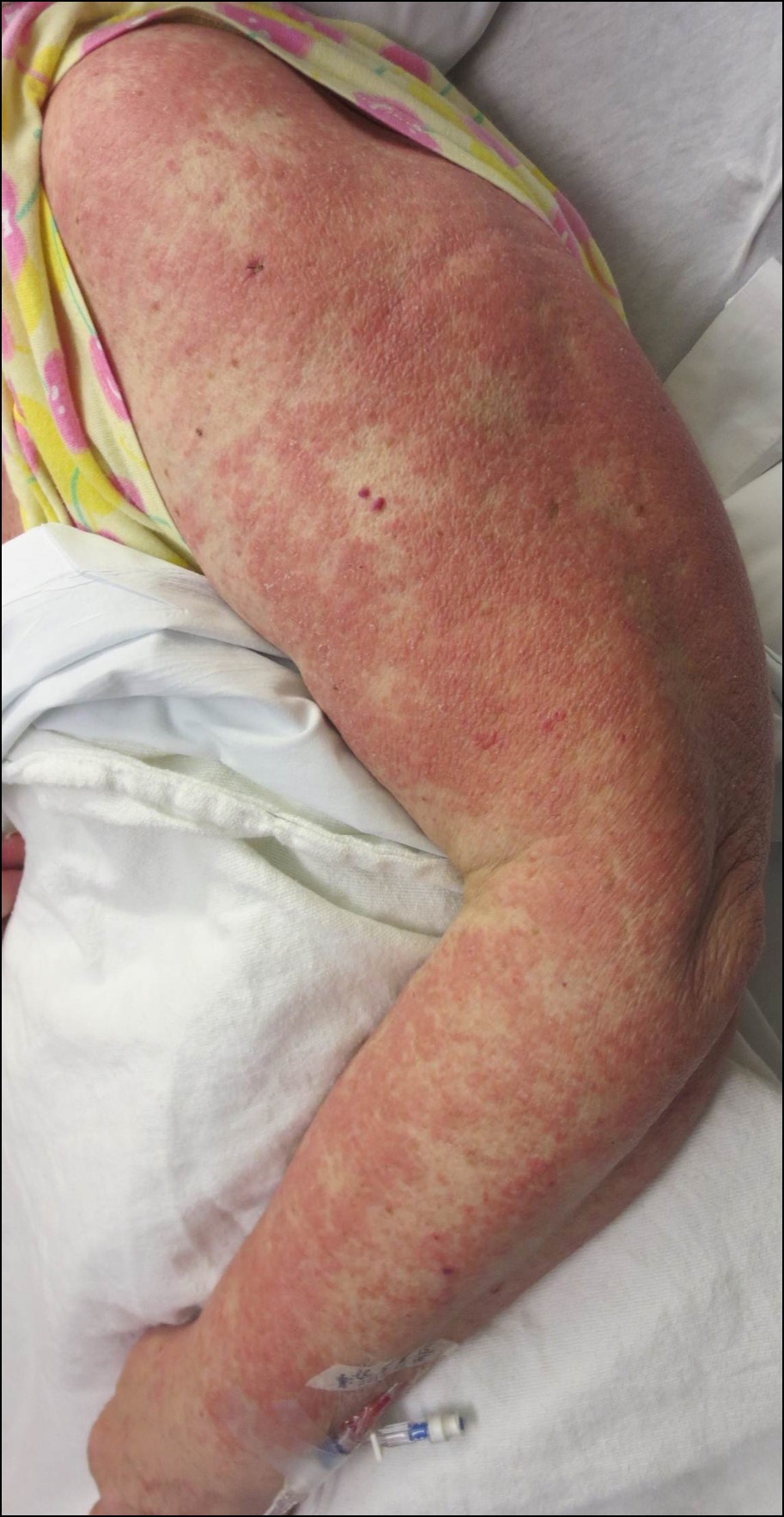 As a dermatology resident, I was mesmerized by the concept of “angioimmunoblastic lymphadenopathy with dysproteinemia” (AILD) after seeing a patient presented at our weekly conference at the Albert Einstein College of Medicine. I was perplexed as to how such a disorder could be considered “benign” when so many patients had a prognosis that one would attribute to a malignant lymphoproliferative process?

The following is the initial abstract describing AILD by Frizzera et al:

A series of 15 patients with a distinct clinicopathologic profile is presented as constituting a new disease entity entitled “angio-immunoblastic lymphadenopathy with dysproteinaemia.” These patients are chiefly elderly, and develop an acute onset of constitutional symptoms, generalized lymphadenopathy, hepatosplenomegaly, and immunologic abnormalities. Histologically, the distinctive finding is obliteration of the nodal structures due to excessive proliferation of small vessels and immunoblasts. There is similar proliferation in other organs, but no evidence of a neoplastic process occurring. A polyclonal increase is gamma globulins occurs in most patients. In one patient there was a monoclonal IgG spike. Both clinically and histopathologically the disease is similar to a graft-versus-host reaction. The clinical course is stormy and responds in some cases to immunosuppressive drugs. Five patients were still living after 15 months of therapy. Severe infections are common and produce fatalities. (1)

Today, AILD is now considered a peripheral T-cell lymphoma (PTCL) and is known as angioimmunoblastic T-cell lymphoma (AITL). PTCL is a heterogeneous group of mature T-cell and natural killer (NK)-cell neoplasms in the WHO 2016 classification. The diagnosis of PTCL requires a combination of genetics, clinical features, morphology, and immunophenotype. (2)

AITL is a rare, potentially aggressive PTCL, comprising 18% of all PTCLs and up to 2% of non-Hodgkin lymphoma. Patients often present with systemic “B” symptoms (fever, night sweats, weight loss, generalized pruritus), signs of other autoimmune disorders, and cutaneous manifestations in approximately 50% of cases. (3)

AITL is a neoplasm of mature follicular helper T (Tfh) cells. (4) The diagnosis of AITL is confirmed by the presence of CD4+, CD8- T lymphocytes expressing normal follicular helper T-cell markers CD10, chemokine CXCL13, programmed cell death protein 1 (PD-1), and B-cell lymphoma 6 (BCL-6). The malignant T lymphocytes may only account for a small portion of the infiltrate, identified by T-cell gene rearrangement for clonal cells. (3) There are cases where the atypical T-cells may be obscured by B-cell proliferation mimicking Hodgkin disease (with Reed-Sternberg-like cells) or B-cell lymphoma. (5)

In a study of 86 patients with AITL, 42 presented with cutaneous features (papules, nodules, “rash,” and purpura). Nineteen (45.2%) demonstrated positivity for the Epstein-Barr virus (EBV) by in situ hybridization. These EBV-positive patients were associated with a pattern of dense superficial and deep infiltrates of pleomorphic large, atypical lymphocytes. Interestingly, EBV-positive skin lesions in AITL may be an independent negative prognostic factor, as opposed to EBV positivity in nodal tumors, which has no significant effect on the clinical outcome of AITL patients. (6)

From my perspective, the most important concern for dermatologists is differentiating AITL from DRESS syndrome (drug reaction, eosinophilia, systemic symptoms, aka drug-induced hypersensitivity syndrome). Differentiating AITL from suspected DRESS syndrome with lymphadenopathy as soon as possible is crucial because the 5-year survival rate of AITL is 30% and median survival time is 1.7 years. Jeong et al identified 17 patients with lymphadenopathy accompanying DRESS syndrome. Five of these patients were diagnosed with AITL by cervical lymph node biopsy and T-cell receptor (TCR) gene rearrangement, although they were initially suspected of having DRESS syndrome. All 5 cases with AITL showed maculopapular exanthem. All showed TCR-β and/or TCR-γ clonality, one patient received chemotherapy, and all died because of septic complications. Their findings demonstrated that DRESS syndrome–mimicking AITL showed a lower drug causality probability, lesser hepatic dysfunction, larger-sized lymphadenopathy, and more frequent splenomegaly than true DRESS syndrome. The authors concluded that when cases of suspected DRESS syndrome with lymphadenopathy are observed, early lymph node biopsy should be performed to exclude the possibility of AITL. (7)

Over the years, I have treated several patients with DRESS syndrome who presented with lymphadenopathy, who, fortunately, have responded well to the combination of withdrawal of the suspected culprit medication and administration of systemic steroids. I appreciate the conclusion of Jeong et al; however, I would modify it to performing a lymph node biopsy should the patient not be improving on a standard DRESS protocol.

Point to remember: AITL may mimic DRESS syndrome. Consider performing a lymph node biopsy early in the course of disease should patients with presumed DRESS syndrome not improve with drug withdrawal and steroid therapy.

Angioimmuoblastic T-cell Lymphoma has been referred to as the “many-faced lymphoma” given the protean skin and other clinical manifestations reported. Early diagnosis is challenging. Patients may have non-specific, waxing and waning symptoms, and positive serologies mimicking autoimmune disease. Skin and lymph node biopsies (with immunophenotyping, molecular, and genomic testing) repeated over months are often needed to make a final diagnosis.