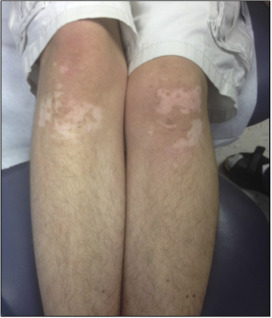 Vitiligo affects approximately 1% of the worldwide population of all racial/ethnic groups, equally affecting male and female patients. As neither immune nor non-immune mechanisms in isolation can sufficiently explain all parts of this complex disease, a convergence of combined biochemical, environmental, and immunological factors in genetically predisposed patients has been proposed as unifying the pathophysiology of vitiligo. Studies have demonstrated the role of CD8 lymphocytes and the interferon-γ CXCL10 cytokine-signaling pathway as being instrumental in the destruction of melanocytes in patients with vitiligo. (1,2)

Multiple autoimmune diseases have been associated with vitiligo, with autoimmune thyroid disease being the most prevalent and well‐established. Others include alopecia areata, pernicious anemia, diabetes mellitus, rheumatoid arthritis, systemic lupus erythematosus, Addison’s disease, inflammatory bowel disease, and Sjögren’s syndrome. (3)
The most profound complication of vitiligo, however, is its potentially devastating psychosocial impact, affecting self-esteem and quality of life. (4). Stress has been postulated to play a role in disease onset in the genetically susceptible patients. The relationship between stress and autoimmune diseases is intricate; it is conceivable that the psychological burden of vitiligo influences the development and/or course of associated autoimmune comorbidities. During the stress response, catecholamines and glucocorticoids are released from the locus coeruleus and adrenal glands. These biomolecules exert control over various immune cells in both the innate and adaptive arms of the immune system, thereby altering the cytokine profile released. (5)

Patients may notice a variety of factors that they perceive as vitiligo precipitants, including friction, sunburn, drug eruptions, irritant dermatitis, scratches on the skin, surgery, and pregnancy. (6) Does gestational vitiligo affect the outcome of pregnancy?

As autoimmune disorders are known to have adverse effects on pregnancy and perinatal outcome, including recurrent spontaneous abortions, prematurity, and perinatal mortality, Horev et al performed a retrospective comparative study comparing pregnancy complications of patients with and without vitiligo. They evaluated 186,222 singleton deliveries, finding 79 (0.04%) patients with vitiligo. Vitiligo was not found to be associated with adverse pregnancy outcomes, including obstetric risk factors, labor characteristics and complications, and birth outcome. Acknowledging the limitation that this was a retrospective study, the authors concluded that vitiligo is not associated with adverse pregnancy outcomes, and these women need not be managed differently from the general obstetric population. (7)

The authors found that patients with vitiligo exhibited a significantly lower live birth rate (odds ratio, 0.870) and a higher incidence of spontaneous abortion (odds ratio, 1.250) than the control group. They noted that an important limitation of this study was the lack of a detailed evaluation for autoimmune disorders in these patients.

In their conclusion, they state: “Vitiligo is not a contraindication for pregnancy, but physician consultations with patients addressing the increased risks of both spontaneous abortion and nonattainment of a live birth would be prudent both before and during pregnancy.” They also assert that further studies are warranted to determine whether systemic autoimmunity explains their findings. (8)

Rita Rudner opines: “Life is tough enough without having someone kick you from the inside.” A pregnant pause is a technique of comic timing used to accentuate a comedic element, where the comic pauses at the end of a phrase to build up suspense. The question of whether gravid patients are at obstetric risk, however, is no joke. Dermatologists need to pause before answering this question definitively. Until such time when a four-armed prospective study is performed (comparing pregnant women with vitiligo and no autoimmune disease, vitiligo with autoimmune disorders, pregnant women without vitiligo but with autoimmune diseases, and otherwise healthy women without vitiligo or autoimmune diseases), any conclusion is speculative. My hunch is that it is the associated autoimmune disorders that are responsible. Should this question arise, it may be prudent to be sure that vitiligo patients have no active diabetes, thyroid disease, etc. during gestation. In the absence of such findings, I think dermatologists can be very reassuring during this most special time.

Research on the pathophysiology of vitiligo has resurged over the past 10-15 years, with exciting new discoveries prompting the emergence of new, targeted treatments for this often psychologically devastating disease. However, equally important in optimizing the management of our patients is to better understand clinical characteristics of vitiligo, such as parameters that influence its onset and progression, as well as associated comorbidities. There may be an effect of pregnancy on the progression of vitiligo, as I have heard many anecdotal comments about vitiligo worsening during this time. However, a report recently suggested that vitiligo can also negatively affect the outcomes of pregnancy. This important commentary by Dr. Heymann puts the reported findings into context and appropriately asks the reader to carefully consider alternative interpretations when counseling patients at this critical time in their lives.